Skip to content
We're about bringing light into the darkness with our music...and having as much fun as possible along the way!

When you sit down with Melbourne-based singer-songwriter Caleb Lewis a couple of things are immediately clear: he’s having a blast on his music-making journey, but it’s about a lot more than just music. 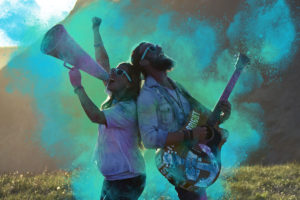 As he states, he, his wife Kyra and the rest of their team are “all about bringing light into the darkness with our music…and having as much fun as possible along the way.” And their raw enthusiasm is evident from the moment they begin chatting about what it is they do.

“We want it to carry something real. Light into darkness. Hope into despair. Joy into sorrow. Really that’s what we’re about…and our music is just like an awesome delivery van to take it there!”

This “delivery van” of music Lewis describes is a mix of guitar-driven rock, with an ever-increasing infusion of folk vibes, blending to create a collection of high-energy, hope-fuelled anthems that definitely make you want to get off the couch to dance along. 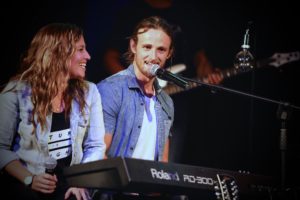 “We find ourselves more and more leaning in to the collective, communal celebration that our music is,” Lewis states, “And the more we do, the more I find myself reaching for the mandolin!”

This emphasis of “communal celebration” couldn’t be more apparent than in Lewis’ latest project (and first ever live track and music video), Future is Bright [Summer Sessions].

Birthed from two years of isolation and separation, the track is an unashamedly exuberant and joyous exclamation of hope for a bright future, however dark today may seem. 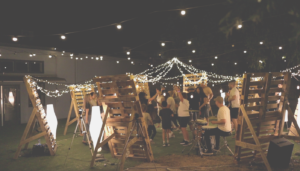 “I think over the last few months of lockdown I had more conversations with people who have lost their hope than any other point in my life. Their dreams, plans and passion have been swallowed up by the isolation, hurt and financial hardships of the past couple of years.”

“So we wanted to be that voice of hope. We wanted to lift an anthem that the future is still bright. God still has a future filled with hope for us – so let’s not let fear or separation or any other challenge hold us back from running into that!”

This led the team to create a unique live gathering (the first live event the band had put on for two years) with the simple purpose of boldly celebrating a bright future together, and recording “whatever came out of it.”

“The beautiful thing about Summer Sessions was that we didn’t gather a group of people whose lives looked anything like perfect. These were people from all sorts of stories and battles. But together we united around this hope, built on God’s promises, and we were going to celebrate that wholeheartedly, however dark today might seem.”

The result is a live track and single-take music video that beautifully capture the raw emotion of the evening and the essence of the message.

The live Summer Sessions track was released alongside a studio version of the song (Future is Bright [ReUnited]), which Lewis recorded in his parents’ living room during the peak of lockdown, when travelling to a studio was not permitted. 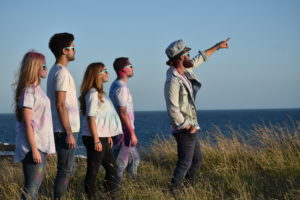 “Recording it was certainly something I’ll remember. There were 9 people in the home, including my new baby. We couldn’t go anywhere, had no studio to record in, so were set up in the lounge room right in the middle of the house. There wasn’t even a door on the room, so I couldn’t count how many takes had to be re-recorded because of dogs barking or Levi crying or someone walking in the front door. But it was great. I’m so grateful we were able to do it, and I think some of the unique life of that season sort of seeped into the recording.”

The track also gave him his first opportunity to collaborate with his younger brother, Jay, for the first time, which Lewis describes as “a really special opportunity, and a great bonus of the season.”

“Jay has always had a lot of really creative ideas, and we’ve done a stack of other projects together, but we’ve never really had the chance to work together on a musical project. So that was really cool. I wouldn’t say I took all his ideas, but he helped push me outside my comfort zone and take the track places I wouldn’t have on my own.” 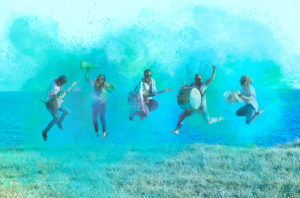 THE ANCHOR OF HOPE

Core to Caleb’s music and life is his faith, and he doesn’t undersell its significance in his journey.

“You know for me the key with this stuff is that it’s real. It’s all fine for me to say ‘hey don’t worry about tomorrow, your future is bright’ – but if I don’t give you something real, something solid to actually hold to then it’s all a bit pointless.”

“The Bible talks about God’s hope being like an anchor for our souls – and that couldn’t be more true for my life. Waves have come, storms have come, but He has never failed, and it’s that genuine hope for the bright future He has for me that gives me a song to sing. So that’s what I want to share. If my music can help people discover the hope God offers them, then I’ll be happy.”

This concept has become a foundation for Caleb’s music and is represented in his logo depicting the guitar and anchor – symbolising the hope he shares through his music.

If you want to get in contact to discuss how Caleb and the team could help share hope in your area, we’d love to chat.

Or you can check out more about Future is Bright.

Meet the team behind the music. Hover over each person to see more about them.